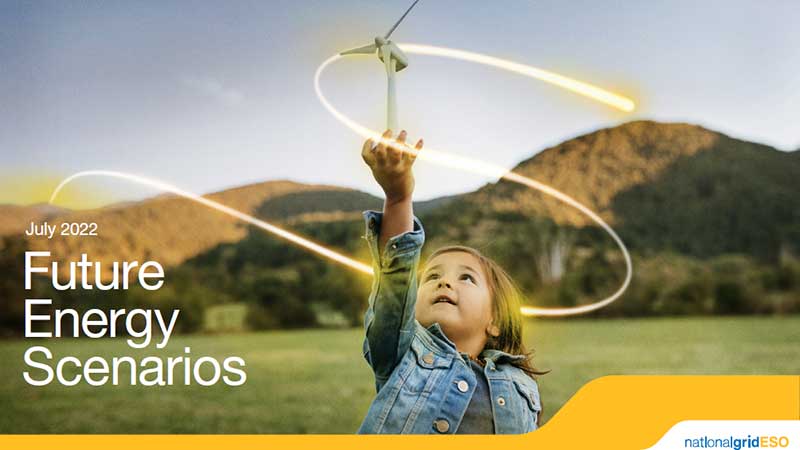 National Grid’s Future Energy Scenarios 2022 (NG’s FES 2022) is a small step forward on their 2021 document. It contains broader, for example considering aviation, shipping and railways (albeit only in terms of emissions, not energy consumption). We agree that “Whole system thinking helps decarbonisation” (p80); indeed, without it, decarbonisation will be unaffordable, impractical, excessively disruptive, unreliable and un-resilient.

Re-naming the “Steady Progression” scenario as “Falling Short” is an excellent change as it says exactly what that scenario does.

National Grid provides a number of focal areas, which are addressed in turn:

Despite many grave errors in the modelling that understate the need for storage, FES 2022 compliant scenarios require 32-52GW of electricity storage. Comparing the total GW and GWh of storage yields an average storage duration of 3.6 hours for the three Net Zero compliant scenarios. Given that nearly all battery storage is typically 1 or 2 hours, also stated in the report, that means that at least as much longer-duration storage is needed, of 4-12 hours duration.

Despite omitting many of the largest potential uses for hydrogen, FES 2022 nevertheless identifies a huge need for it, widely varying between scenarios, of up to 431TWh hydrogen. Adding in those uses (such as industrial and chemical processes, synthetic fuels and complex compounds like ammonia) would greatly increase the total need for hydrogen, even if some of the less-likely uses cited in the scenarios were discounted.

The focus on “consumers” is still as strong and misleading as ever.

Policy and Delivery focuses on demand side strategy (both reducing demand and balancing demand profiles), energy efficiency (again reducing demand) and a focus on heat, which is about heat itself, largely ignoring how the energy is generated, distributed and balanced to produce that heat where and when needed. These are tickling the edges of the challenges, skirting around the edge of the big issues which are generation, storage, the transmission and distribution systems (network size and shape), integration of system and network thinking, enabling projects to benefit from improving overall system costs etc., reliability and resilience. Focusing so heavily on demand abdicates the challenge of ensuring sufficiency and security of supply.

This again misses the point. Digitalisation (ungrammatical as it is, it should be digitisation) merely optimises the use of energy in the system; it doesn’t ensure that there’s enough there in the first place, or with suitable reliability, resilience or energy security. It cuts margins to the bone, virtually eliminating the ability of consumers to change behaviour or systems to react if there is some substantial change, such as a faster or slower roll-out of EVs, or energy supply challenges.

While it’s important to educate consumers and help them change for Net Zero, the effects of most such initiatives (e.g. Smart Meters [which can at most reduce consumers’ bills and network peak demand by ~5% according to their own publicity or, more realistically, 1-2%], though smart-charging EVs [a much more marginal exercise than claimed] is additional to that figure) is at best marginal. Other experts looking at an average £693 increase in energy bills think that as much as a mere £75 could be saved, in comparison with the price cap expected to rise to £2,800 by October – that’s just 2.7% and assumes that all consumers will have the time, inclination, incentive and ability to maximise their benefits: of those that have the inclination and ability, how many are earning little enough for £75 p.a. to be sufficient incentive?

Locational signals are good but, if taken to National Grid’s natural conclusions, will sub-divide our 50-100GW grid (depending on whether we’re looking at now or the future) into hundreds of tiny sub-markets which, of their nature, will disadvantage the large and broadly-capable solutions that the grid most needs. Moreover, some of the technologies most essential to Net Zero (e.g. wind, large-scale long-duration inertial storage) have to be put in specific regions; penalising them inordinately for doing so would make the energy transition unachievable.

And market participation is geared around bringing into the grids ever increasing numbers of participants at the distribution level, small scale and short duration, which are exactly what is driving up the costs and hurting the reliability and resilience of the transmission grid.

The whole-system thinking that is presaged by National Grid’s Pathways to 2030 Holistic Network Design document (which I analyse elsewhere this month) is far too short-term to achieve the objectives without wasting a fortune on future re-work and without building enough grid to encourage new Net Zero compatible projects to come forward.

Inter-seasonal storage is just an assumed need. And National Grid seeks to jump to addressing it before (a) addressing the long-duration energy storage needs, i.e. 4 hours to 2.5 weeks duration, (b) determining how much seasonal storage is needed or (c) imagining any ways in which to incentivise reserve – which is why, in gas, the UK has just 3 days’ reserve as compared with 3-9 months as standard in continental Europe.

Whole system competition is only about delivering something similar to what NG engineers have conceived. There is no concept that others may have ideas, initiatives and projects that offer radically improved alternatives (such as Storelectric’s proposal to halve the size of grid needed for each offshore wind farm, with many other linked benefits) or considering any way of sharing the benefits with such project developers.

Without all the considerations above, the transition to Net Zero will not be fair, affordable, reliable or resilient. Despite the section headed such on p13, National Grid is not “seeing the whole picture”, excluding, for example:

Today the UK has a 50GW grid and (mostly) 50GW markets. There is some, but limited (e.g. TNUoS) regional incentivisation to push developers to think carefully about where they put their proposals.

National Grid wants to greatly enhance these regional signals, which is fine for those projects (e.g. batteries) that can locate anywhere but will make projects without such flexibility (e.g. offshore and onshore wind, large-scale long-duration storage of any type) much harder to fund. And by doing so, it would make the energy transition as a whole unachievable: how can we generate enough power without locating the offshore wind beyond the furthest extremities (north, north-west, north-east and south-west) of the British Isles? How can security of supply, energy affordability and sufficiency, and grid reliability and resilience be achieved (i.e. all those factors together, not just some of them) without large-scale, long-duration, inertial storage?

Another result of regionalisation is to salami-slice the current single markets for most grid services / products, which are 50GW but rising towards 100GW, into numerous mini-markets. Just look at retail to see what that means: reducing volume and variety while increasing costs both of the products themselves and of doing business. Suddenly a GW-scale solution would become so dominant in its mini-markets that they would not be permitted to contract at the scale most suited to their technology.

The energy transition is about replacing hydrocarbons with zero-emissions technologies, so Net Zero technologies must be at the scale of hydrocarbons (i.e. of power stations), or the objective will be missed by a very wide and/or costly margin. The power stations deliver energy, availability / dispatchability, grid stability, reliability, resilience, energy security, Black Start and other capabilities at the same time, indeed they do so concurrently with the same plants; therefore Net Zero technologies must do all these too: otherwise the energy transition will be unaffordable, unreliable and fragile which will lose both public and political support for it. 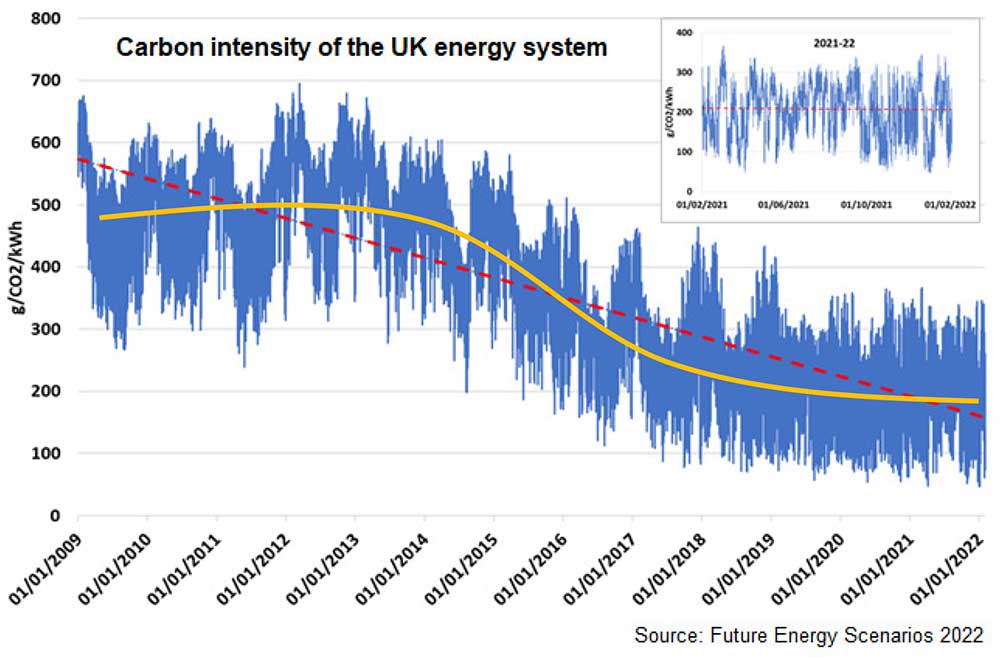 The British grid’s carbon intensity is shown to be decreasing fast. However, that is utter complacency, supported by fitting a straight line as a trend (the red dotted lines): the true trend (orange solid line) is an S shape, which would show that the grid’s carbon intensity largely levelled out from 2019 and shows little sign of further improvement, as shown by the inset graph which flat-lines over the last two years. Indeed, without sufficient large-scale, long-duration, naturally inertial storage, and the regulatory and contractual arrangements to encourage it, little further improvement is achievable. This calls into question whether any of the scenarios, on business as usual, will even come close to Net Zero as it questions whether the power sector would decarbonise at all, let alone by 2035.