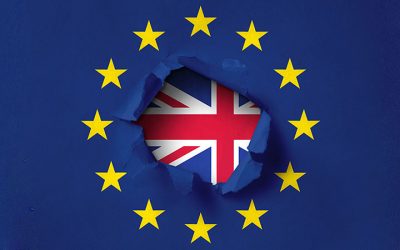 Given the current postponement of Brexit until (appropriately???) Halloween (31st October), the following is Storelectric’s current understanding of the impacts of Brexit on our PCI projects and a bit more widely. Please note that this is not an assessment of its impact on the rest of the business, and please also note that it is our understanding; we do not guarantee this assessment, and recommend that you undertake your own assessment if it affects you.

European Projects of Common Interest and Brexit
Storelectric has one approved Project of Common Interest, 500+40MW TES CAES with 5 hours’ duration for each plant, in Cheshire. We also have a second PCI awaiting approval (the process is going well), for a 300MW +/- 20%, 5 hours’ duration, also in Cheshire. As both are located in the UK, Brexit affects them, for which the news is good, bad and ugly…
The Bad
We were rejected for CEF funding of our Project of Common Interest. However the rejection was by a narrow margin on only a few points of evaluation, all of which we can address.
The Good
We are re-applying on 13th June (preliminary decision August), grant Jan 2020). We had review discussions with INEA who have indicated that we were actually quite close; we have developed a good idea from these and discussions with other grant winners as to how to adjust the application. The advice we have received is that the UK’s Treasury Guarantee covers projects that have been decided pre-Brexit, so this would qualify for it. The advice is that this applies to the INEA decision which is in August, rather than to the European Parliament’s ratification of that decision which will be in January 2020. Therefore our hopes are high.
The Ugly
In a word, Brexit. There are 3 possibilities:

Other Projects in the EU
Projects elsewhere in the EU (e.g. the Netherlands project for which we are currently undertaking an early-stage feasibility study for NAM) will continue to qualify for PCI status and support at all stages. Therefore the EU Projects of Common Interest initiative will remain relevant to Storelectric for the indefinite future.
A Benefit
There is one (yes, just one) benefit of Brexit for Storelectric, though it’s rather a big dis-benefit for the country. The Single Market and the European Court of Justice are the only two things preventing our neighbouring countries saying “I don’t care how much you wish to pay, our consumers are more important than yours, so we won’t let you have electricity for your needs because we want/need it”. If we exit without a deal, they can say that. Nearly every country in the EU (all but NO, AT, CH and FR) has a transition plan that, by 2030, relies on imports during times of system stress – which are largely concurrent with our times of system stress. France’s plan is to have enough for their own needs, and only to export renewables. So when renewables aren’t generating across a number of countries at a time (which is a frequent occurrence), there won’t be any spare energy for the UK to import. But we already can’t supply our own peak demand with baseload and dispatchable generation, so the result would be widespread black-outs. This would focus government / grid / Ofgem minds on storage. As stated, this is a benefit for us but a dis-benefit for the UK. And there is a risk with it: when it happens the political emphasis will be on solutions that can be available by next winter, i.e. batteries, rather than proper large-scale long-duration solutions which require planning and new grid connection lead times.

CEF: Connecting Europe Fund. This is the fund which finances those Projects of Common Interest that are approved but not commercially fundable without EU financial support. Given that PCIs are supposed to be commercially viable, CEF funding should be rare – maybe ¼ to ½ of PCIs receive CEF grants for Studies, and fewer for construction funding – though the average value of construction funding is around €100m per project funded.

INEA: The Innovation and Networks Executive Agency, which administers funding for TEN-E.

PCI: Project of Common Interest, the projects approved under TEN regulations. There are three types: transport, telecommunications and energy. Energy is of three types: gas infrastructure, transmission grids (especially interconnectors) and storage. The most important storage qualification criteria are: on a grid that is 110kV or above; size 225MW or above; and capable of delivering at least 250GWh electricity per annum. In practice, batteries are excluded by the size criteria.

TEN, TEN-E: Trans-European Networks (… for Electricity) is the cover-all term for the regulations related to developing the integration of transport telecommunications and energy – the Juncker plan that was proposed in response to the financial meltdown almost a decade ago. It is embodied via PCIs and TYNDPs.

TYNDP: Ten-Year Network Development Plans, administered by multinational groups of relevant national bodies. Our relevant group is ENTSO-E, European National Transmission Service Operators for Electricity, on which the UK has four members: National Grid Electricity Transmission plc, System Operator for Northern Ireland Ltd (now incorporated into Eirgrid), Scottish Hydro Electric Transmission plc (for the Scottish Highlands) and Scottish Power Transmission plc (for the Scottish Lowlands and Borders). Most important meetings are public, and attendees can influence and even vote on policy even if not official member companies.

As only a minority of PCIs get funding, the non-financial benefits of being a PCI are significant or there would not be as many. These include: