Storelectric is participating fully in the hydrogen economy in five ways:

We expect future energy networks to be like today’s networks with two major elements: hydrogen and electricity; today, they are methane and electricity. With investment, methane grids can be converted to hydrogen grids; much of recent years’ grid investments in recent years in many countries has been hydrogen compatible. Of course, electricity is needed to make the hydrogen, and hydrogen in turn will be used to make synthetic fuels, but what is transmitted along networks will mainly be these two. As today, they are mutually complementary and compete little with each other and, again as at present, some applications use both. 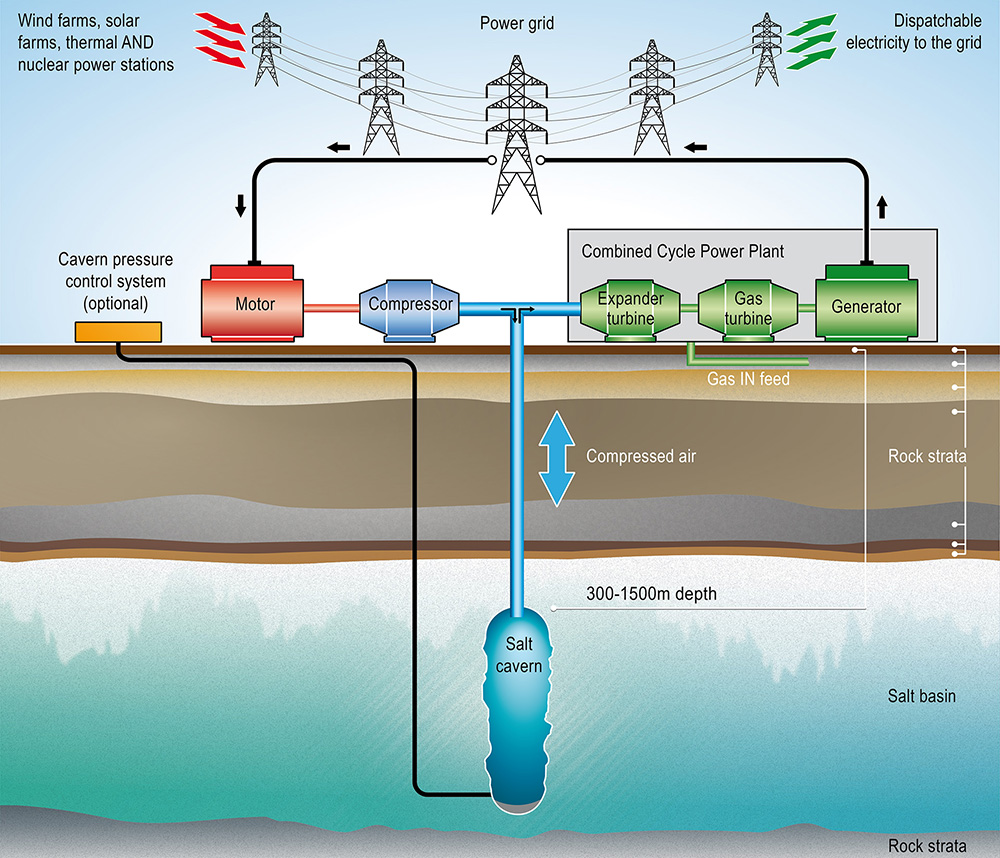 Storelectric’s Hydrogen CAES is, by definition, hydrogen ready. Until sufficient hydrogen is available at suitable prices, it can burn methane or any mix of hydrogen and methane. Thus it will decarbonise as the energy transition progresses. The hydrogen could be obtained either from the gas grid (which, in many countries, will be converted to carry hydrogen and, intermediately, mixes of hydrogen and methane) or dedicated production such as by on-site or near-site electrolysers.

An average lorry-sized tank, carrying hydrogen at 20bar pressure, can carry only 75kg of hydrogen. Therefore massive-scale storage is required. Salt caverns can be used to store hydrogen at such scale: indeed, these caverns are very similar to those used for CAES, though with higher-grade materials in their drill strings, wellheads and other pipework and sundries. Those designed for hydrogen can carry air, but not necessarily vice-versa. Storelectric plans to have hydrogen caverns adjacent to its air caverns, and to have at least some air caverns built to hydrogen standards for future convertibility. This also leaves us well placed to provide large-scale storage for leasing to other companies’ hydrogen projects.

There are other synergies between CAES and hydrogen, especially because electrolysis does not operate as efficiently when powered intermittently. Bu including CAES in a renewables + hydrogen project, we can deliver near-baseload energy to the electrolysers, as well as high-value services to the electricity grid, and can do so very cost-effectively. Not only is it more efficient when operating as near-baseload, but it also requires much fewer electrolysers per unit of output hydrogen, greatly reducing capital costs and somewhat reducing operational costs. Thus CAES acts as both a provider to the grid and a project-and-performance enhancer to the hydrogen.

Breaking water into hydrogen and oxygen takes energy, and the more of that energy that comes from heat, the less is required from electricity. Storelectric has a granted patent (PCT/GB2019/052168) in using the heat of compression to catalyse electrolysis. This has potential to provide large amounts of very cost-effective green hydrogen for the hydrogen economy, which could be a game-changer due to the cost of electrolysing hydrogen today.

This patent has been granted and, within the above description, is relatively broad and strong. But it needs a few years’ R&D to turn it into a commercial reality. We intend to use the proceeds of CAES plants, and/or investment, to finance this work.

With all this evident expertise, Storelectric is increasingly being consulted for other projects involving hydrogen and its storage. These may or may not involve CAES.

Sir David Attenborough states categorically to Barack Obama, with supportive response from the American president, “If we find ways of generating AND STORING power [his emphasis] from renewable resources, we will make the problem … disappear”.

This was when Obama interviewed Attenborough. (This is the Guardian’s cut-down version, to save time viewing the full 35 minutes.)