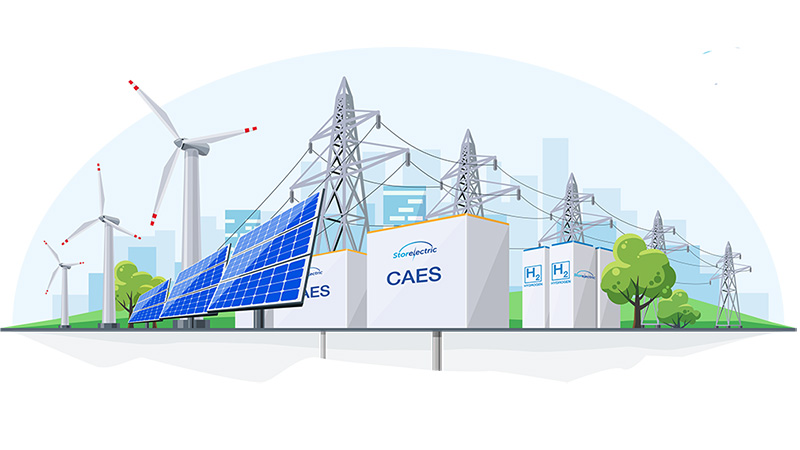 Until now, our website has under-sold our hydrogen capabilities, which are strong, including:

We see hydrogen and CAES as entirely complementary and not competing much. Please read more here.

Storelectric Featured in Net Zero Toolkit
The Solar Impulse Foundation’s “Toolkit” (also called a “solutions explorer”) to help decision-makers meet their climate goals post COP26. This enables people to find solutions that have been validated exhaustively, among which is ours.

The Gas Crisis
It is clear that the current astronomical gas prices world-wide are alerting people to how dependent we are on it for our power. This bodes ill for climate change: if we can’t kick the gas habit, we’ll never stop global warming because CCS/CCUS will never be either effective or affordable. The only way to achieve net Zero, and to kick the gas habit, is to have sufficient large-scale long-duration storage to ride out the current weather pattern which is a small kalte Dunkelflaute. A previous blog explained how to calculate the need for storage. And keeping nuclear energy in the mix to supply baseload demand would vastly reduce the amount of wind, solar and storage needed: 1GW nuclear baseload is approximately equivalent to 3GW wind, 6-8GW solar and their associated storage.

National Grid Lays Out Reinforcement Needs to 2032
National Grid’s Electricity Ten Year Statement (ETYS) lays out enormous grid reinforcement needs to cope with increased intermittent renewable generation in Scotland and the East, with knock-on effects throughout the country. This investment, costing tens of billions, would be largely unneccessary, with sufficient large-scale, long-duration, inertial storage on the grid.

This has world-wide relevance: unless other grids develop appropriate regulation and storage, they will incur similar costs as their renewable penetration increases.

National Grid’s Distributed ReStart Project
Also with world-wide relevance, this project looks at how to re-start a Net Zero grid using distributed resources. Even though it finds numerous issues that make it excessively costly, complex and problematical, they persist in the “groupthink” which also infects Ofgem, whose approach to the entire project is neither critical nor regulatory but managerial. The only reasonable, cost-effective and manageable solution is to focus on incentivising the construction of transmission-connected inertial plants with black start capability, such as hydro, biomass, nuclear and inertial storage.

In the last 3 months, British grid balancing costs have doubled, prompting a review by National Grid and Ofgem. It is evident that stability, constraint management, grid connection and grid reinforcement costs are also increasing exponentially. This 2-page article looks at why and what can be done about it – the links provide much more information. He has been predicting all this for 6 years, and it will occur in all markets world-wide unless the lessons are learned.
Read The Blog