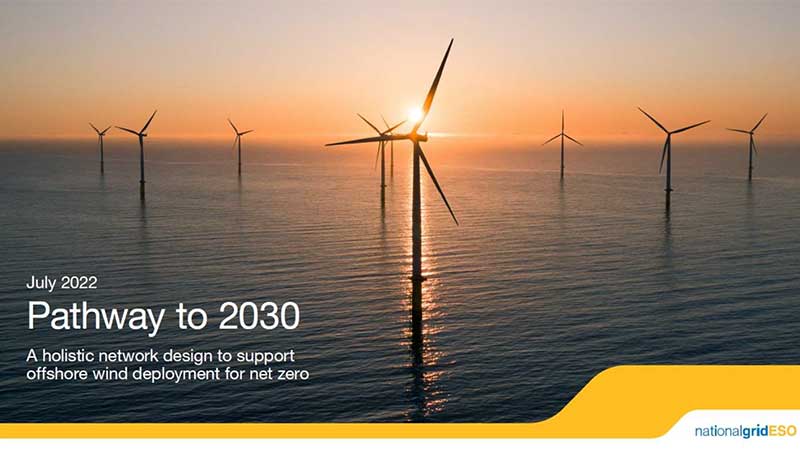 National grid has taken a good step forward by producing a Pathway to 2030 Holistic Network Design. It is really good that it considers the entire network’s needs, though will need to be updated with, for example, the new Celtic Sea areas, increased offshore wind targets etc. But such plans are always in need of constant updating, so that’s not an issue.

What is an issue is that it’s a fantastic waste of money and effort, as it refuses to consider connecting offshore wind through large-scale, long-duration, naturally-inertial storage. To take East Yorkshire as an example, this leads to two major wind farms causing such overloads that three interconnectors need to be built (which help greatly with Scottish wind) but then, where these join, every single major grid line southwards needs enormous reinforcement and some new lines need to be built. This appears to target £54bn investment, triple last year’s estimate of £1.25-1.5bn capital costs (£1bn estimated by National Grid in NOA 2021, plus our guesstimate of the costs of connecting up balancing and stability services) per GW of new offshore wind connected, plus 10% of that annually to keep the system going. This excess is because we don’t believe that that estimate included all the 6 new interconnectors and 15 new lines / circuits (ignoring re-conductoring, thermal upgrades etc.). And the plan still involves lots of current limiting devices, i.e. built-in curtailment. Our storage can save many billions of this grid reinforcement (document updated to reflect this report).

We estimate that adding in the other matters will mean that grid actions cost £1.75bn capex per GW new wind, plus £175m p.a. operation, maintenance and financing costs thereafter, plus un-guesstimated additional costs of sourcing the balancing, stability and power quality services. This is a 43% increase on the already-astronomical Network Options Analysis 2021.

National Grid claim that the design delivers “overall net consumer savings of approximately £5.5 billion compared to an optimised radial design.” But note the comparator: a radial design, not today’s costs, so it’s a major net consumer cost. So all they’re saying is: it’s bad, but could have been even worse.

Worse, it is not the optimised cost if, for example, there were sufficient large-scale long-duration naturally inertial storage on the grid, especially between DC systems (solar, wind, HVDC links etc.) and the AC grid.

Another huge problem is that it’s to 2030, meaning a phenomenal amount of re-work and wasted money upgrading the grid again 2030-2050 instead of seeking a single upgrade to 2050 needs. Yes, it gives consideration to some needs in that timescale, but no deep thought or analysis: they can’t get round their aversion to building ahead of demand, thinking falsely that doing so would “gold-plate” the grid.

Even if a little excess capacity is built, (a) the savings of doing it in one step will dwarf the excess, and (b) this capacity will be used sooner or later, as we’ve discovered with the so-called “gold-plated” pre-privatisation grid. Such false economies severely impede the energy transition, as Texas shows (analysis here): when grids were extended, renewables were built; when grids were saturated, projects were cancelled.

Looking at 2030 is looking only 7.5 years ahead. Their quoted lead times for grid connections are longer than that. And the better, more affordable, more reliable and more resilient solutions would involve lots of suitably located large-scale, long-duration, naturally inertial storage which has lead times similar to or longer than this period. So, while it’s good that they’re trying to get on with the work, it is really being done myopically.

A longer view would agree that much of the work outlined needs doing, but that some ought to be much larger in capacity (saving enormous re-work costs), and some would be better serviced by alternative solutions and routes (and therefore the excess costs of this short-termism are even more horrendous).

National Grid look at a large number of changes to industry codes, standards and licenses. But these all relate to offshore networks, which a previous analysis has shown to be of only a little benefit – and of no benefit during times of system stress when the benefits are most needed.