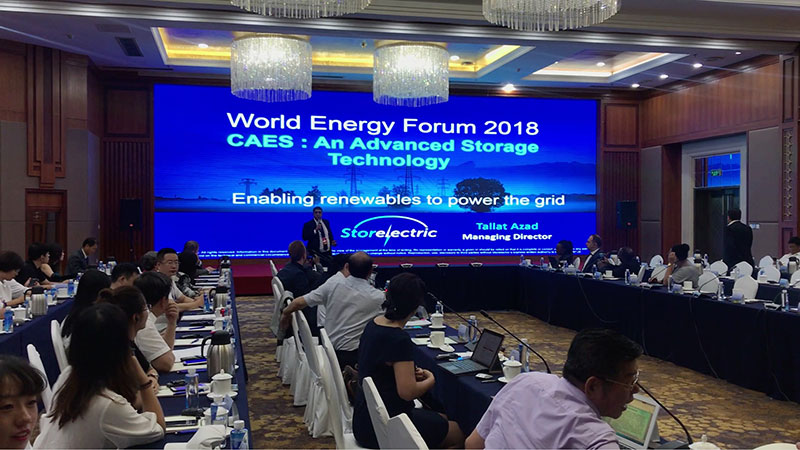 The World Energy Forum 2018 took place in Ordos, Inner Mongolia (which is one of the autonomous regions of China) between August 10th-12th. Storelectric Ltd were personally invited by the President of the WEF Dr Harold Oh. To see the letter please click here. Tallat M Azad the MD of SEL Ltd presented under the session Advanced Storage Technologies with Professors Simon Hogg (Durham University) and Philip Leigh (Hull & Humberside University) amongst others.

There were dignitaries present from various interrelated areas including Ambassadors, Noble Laureates, Businesses, Government Officials and Academic Institutions. In total over 400 people attended, all focused on discussing renewable technologies, their challenges and their solutions (such as Storage, which is where SEL Ltd enters the discussion). The picture below was taken at the opening ceremony and shows the full group of presenters and our Inner Mongolian hosts (our Storelectric MD is in the middle directly under the word “culture”).

SEL Ltd was one of only 2 businesses present and as such a reflection of the importance of SEL’s role in championing grid scale storage (the other company Yunasko from Ukraine was involved with batteries and ultracapacitors therefore much smaller scale). A list of all attendees and the agenda is available on request.

What was of particular interest was the wide-ranging themes discussed at the forum, in addition to the more obvious topics such as the developments in different types of renewable technologies (Wind, Solar, Anaerobic Digesters), storage solutions (CAES, Pumped Hydro and Batteries) and grid integration there were discussions on the blue economy (opportunities in space), how to revitalize landscapes that have been heavily mined, the impact of air quality on the aged population and means of attracting tourism in the grasslands (of inner Mongolia).

Storelectric ended its presentation with a 5 step plan as follows

Follow up discussions took place with the Mayor of Ordos and his deputies, all expressed an interest to take the next steps. There was also a discussion with Dr Robert Loughlin, a Noble Laureate of Physics (in 1996) currently Professor of Physics at Stanford University, someone who is passionate about storage, is very supportive of CAES and sees solving the storage problem as the most pressing issue this century. Robert agreed to a short video interview included in attachment 2.

In addition to the conference presentations the Chinese authorities kindly organized various excursions and extra-curricular events, these included

Inner Mongolia has a rich and diverse cultural heritage and the Chinese authorities see this as an area with untapped potential. It has mineral wealth, the right balance between traditional culture and new technology, the inner Mongolian people are very protective of their heritage (in addition to Mandarin Mongolian is still spoken and written in the province) and importantly this is considered to be an area that can drive the new energy transition. Storelectric was honored to be invited to such a prestigious event.

Events such as these provide a limelight to SEL and demonstrate the importance of grid scale storage at a global level giving further support to the assertion that storage is a global business and essential if renewable deployment is to continue, a message the Chinese authorities (and others) have understood and fully endorsed. We hope to present at next year’s WEF to be hosted in New York.

A View on Energy Storage

A short but illuminating interview with a Noble Laureate in Physics (and a Professor of Physics from Stanford University).