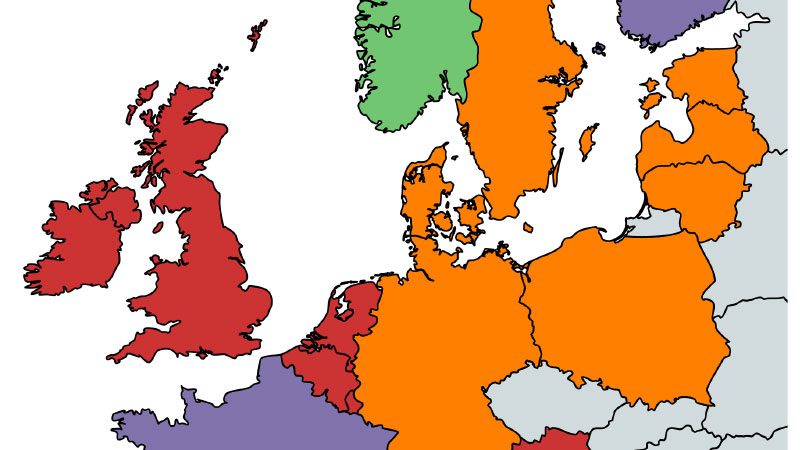 Following our article a week ago, Mark Howitt from Storelectric pointed out the omission of their very interesting long duration storage technology.

Storelectric has developed what they claim is the world’s most cost-effective largescale long-duration electricity storage technologies based on advanced forms of Compressed Air Energy Storage. These will greatly reduce the cost of the transition to a Net Zero grid, and of enabling the electricity system to help with the decarbonisation of heating, transportation and industry.

Intermittent renewables are currently balanced by dispatchable generation and imports. These incur a total cost of well over £2bn p.a. to the electricity system in overt (e.g. curtailment, Capacity Market), covert (e.g. rocketing total costs of balancing and ancillary services) and hidden (e.g. under-priced emissions) costs, rising rapidly. In a level regulatory playing-field, Storelectric’s storage can deliver these services without subsidy.

Storage at such scale and duration can be located strategically, such as to take the electricity generated by offshore and onshore renewable farms. This would reduce the scale of peak load on the grid by half for wind and two-thirds for solar, thereby greatly reducing congestion and the costs of grid connections and reinforcement. The renewable farms would benefit equally from a reduction in their grid connection costs and access charges.

Correspondingly, if (say) 100MW of wind or solar is already connected to the grid, building 100MW of storage at such scale and duration would enable a further 100MW wind or 200MW solar generation to be added to the same grid connection.

The UK already depends on imports of electricity at “times of system stress”, such as high demand and/or low renewable
generation; so do Ireland, Austria and the Low Countries, together with much of the Eastern EU. According to their national
energy transition plans, by 2040 these will have been joined by Denmark, Germany, Italy, Poland, Sweden and Spain (see map).

France is relying on a 40GW nuclear build-out to be on-time and to-cost, on which the reader can make their own judgement.

Since these times of system stress (such as after dark on a windless winter evening) are largely concurrent across many or all of these countries, if all are importing, who is exporting? We therefore cannot rely on there being a surplus of energy to import, and leaving the Single Market (regulated by the European Court of Justice) will mean that our neighbours can legally tell us that their customers are more important to them than ours. Therefore black-outs will ensue if we don’t have sufficient
dispatchable electricity in the UK; large-scale long-duration storage is the most cost effective way of achieving this. 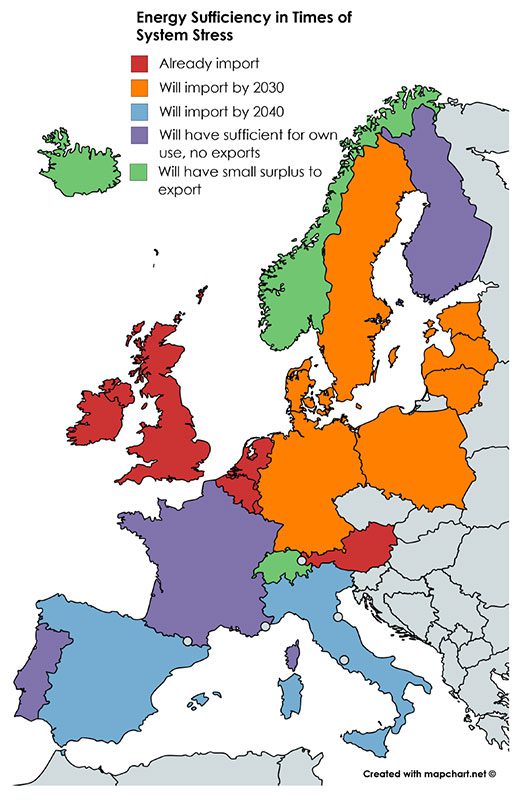 As inertial generation (i.e. power stations) decrease, the grid is becoming increasingly difficult to keep stable – as was seen in the 9th August 2019 black-outs in the United Kingdom. Even apart from such extreme events, National Grid is developing all manner of new financial contractual and management instruments such as faster responses, Stability Pathfinder and initiatives in voltage, frequency and constraint management. All this is very expensive, not only in contractual terms but in administration and grid management too.

Storelectric’s technologies both deliver twice the inertia and over six times the reactive power/load and related services of an equivalent-sized power station – and can do so 24/7. This greatly increases grid stability, making this plethora of instruments much less important and costly to run. 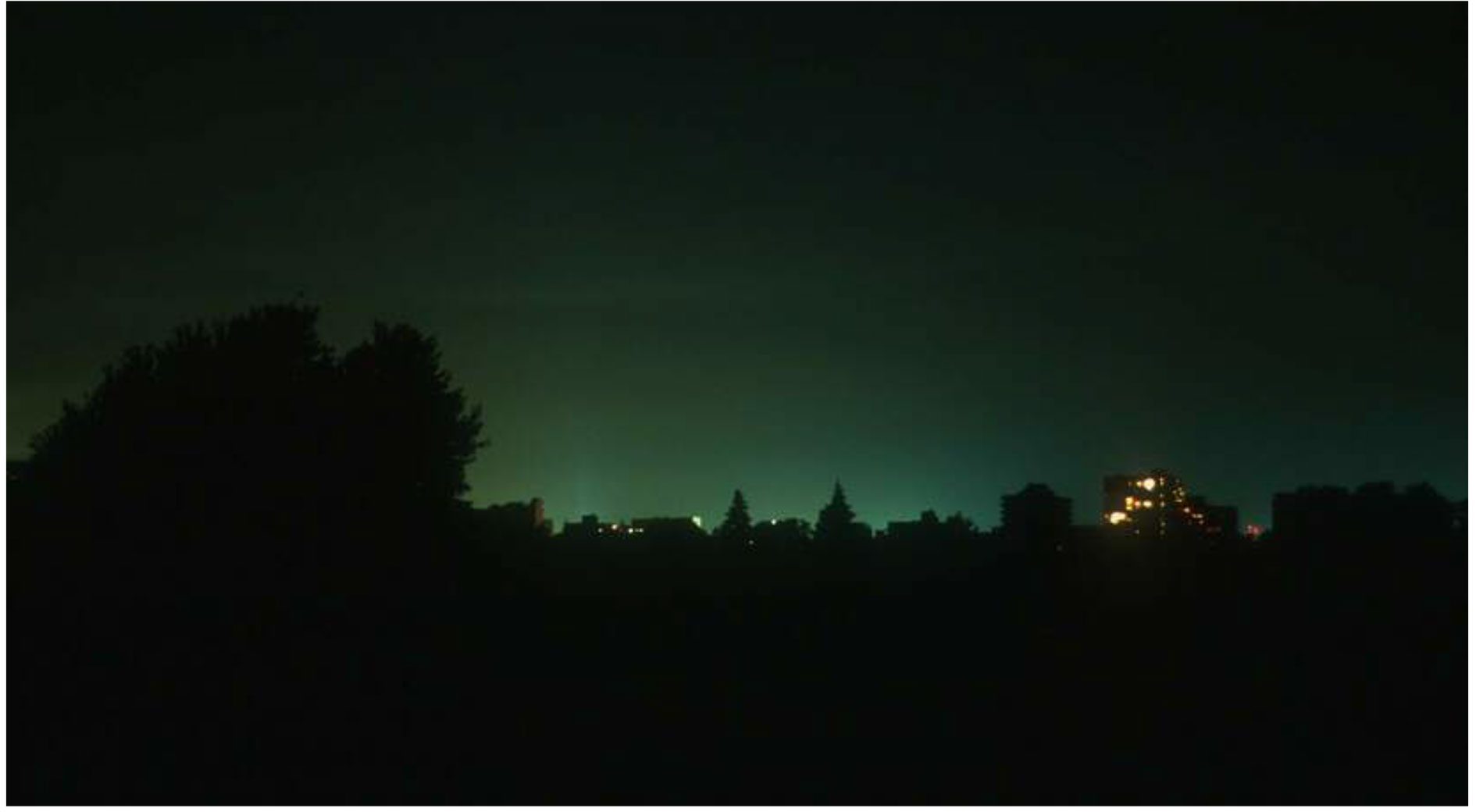 These plants can also be built to deliver black start, with the scale and inertia required to re-start entire sections of the grid.
Storelectric’s technologies both deliver twice the inertia and over six times the reactive power/load and related services of an equivalent-sized power station – and can do so 24/7. This greatly increases grid stability, making this plethora of instruments much less important and costly to run.

These plants can also be built to deliver black start, with the scale and inertia required to re-start entire sections of the grid.

Storelectric has two main technologies and hybrid versions of them, namely:

Both technologies are vastly cheaper per MWh than both batteries and pumped hydro, and able to be installed closer to both supply and demand than the latter. There is vastly more than enough geological capacity in the UK to provide a fortnight’s back-up, sufficient to tide us through the kalte dunkel Flaute (cold dark doldrums), a 2-week weather pattern (high pressure in winter) during which renewable generation is low or negligible across most of the continent, occurring every couple of years – or much more frequently over more restricted geographical spreads or durations.

Both technologies are simplified versions of other technologies, and built entirely with standard equipment. Green CAES ™ replaces the cooling tower, gas feed and gas combustion of the Huntorf and McIntosh CAES plants with thermal stores, the system and its capabilities having been validated by numerous multinational engineering and manufacturing companies. CCGT CAES is a minor modification of a CCGT power station (though it could also be retro-fitted to OCGT power stations), and also supported by analysis from engineering and manufacturing multinationals.

Working With Other Technologies

Storelectric does not see themselves as supplanting batteries, Demand Side Response and other such technologies, but as working with them. Mark Howitt, CTO and a co-founder, likens the electricity system supporting renewables to the road network supporting our lifestyles: with only motorways and trunk roads we couldn’t get to our offices, shops and homes; with only small roads we couldn’t get anywhere fast or far. All are needed, but they need to do the jobs for which each technology is optimal.

The main challenge they face is the time to build each plant, which is largely due to planning and grid connection lead times. A plant connected to the distribution grid will take about 3 years from finance to trading; on the transmission grid 7 years. This means that to minimise the cost of the energy transition, and to maximise the reliability and stability of the grid, the first plant needs building soon. Storelectric has scores of verbal expressions of interest in funding follow-on plants in the UK and across 5 continents; all they need is the finance to build the first.