The Scale of Need for Storage 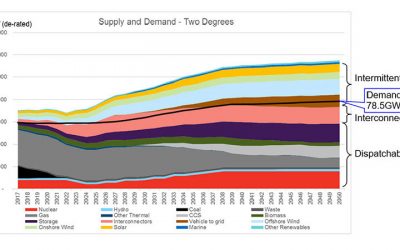 The energy transition to a zero-carbon economy is, quite correctly, seeing widespread roll-out of tens of GW of renewable generation. we’re already at over 30GW and, because of load factors, to supply our 56GW peak demand will need over 200GW nameplate capacity of intermittent renewables before the last fossil fuelled power station can be retired. And that demand is expected to grow substantially in both power and energy as heating, transportation and industry are decarbonised – each of those three sectors consumes roughly as much energy as the entire electricity sector, so we can reasonably assume that electricity demand will increase between two-fold and four-fold. It may even be more, as conversion of energy into different forms for different uses always carries inefficiencies; and all this assumes that our total demand for energy is not going to increase.
But most of today’s (solar, wind) and tomorrow’s (wave, tidal) renewable generation technologies are intermittent: however predictable they are (and forecasting is getting much better at that), they generate when they want to and not when we need it. So how do we move all that electricity from when we don’t want it to when we do?

Currently the UK and Europe are proposing three solutions: demand side response, storage and interconnectors.
The economy’s potential for DSR was evaluated by National Grid in 2015 (they haven’t updated it since) as ~5% of total demand, about 3GW at most. But if we turn off a fridge now, we can’t turn it off again for quite a while, so if we want to use it (say) thrice in an evening, we can only use one-third of it at a time, giving us about 1GW of flexibility. And its typical duration is 15-30 minutes, which means its proper role is as the best and cheapest option to cope with short duration spikes in generation and demand, whether those spikes are upwards or downwards.
Currently National Grid, BEIS and Ofgem say that we don’t need lots of storage, just lots of flexibility – and that’s a quote that has been told to me by all three. So they are planning on lots of batteries. These are typically up to 40MW size, with 20-60 minutes duration. And their efficiencies are much lower than advertised: while their internal gross efficiency may indeed be their quoted high-80s to low-90s %, their true net grid-to-grid efficiency has been measured at 42-69% on day one. The differences are largely due to two factors; the smaller factor is AC-DC-AC power conversion and signal conditioning, and the larger factor is heating and cooling. And by the time the cells are swapped out at 80% of capacity, they emit three times as much heat as on day one, thereby enormously reducing that efficiency. Their proper role is therefore for short duration peaks and troughs in demand and generation, not for grid balancing.
Interconnectors operate at the Gigawatt scale, and the country is planning for 19GW within a decade or so. In fact, all scenarios in National Grid’s Future Energy Scenarios have UK based dispatchable supply dropping below demand in 2020 or 2021, meaning that we will be relying on imported electricity not only for our supply margin but also for actual demand.
But this meets with three challenges: natural cycles, neighbours’ plans and Brexit.

The first challenge, natural cycles, are seasonal, diurnal and weather-related.
I differ from orthodox views and I don’t believe we will ever need seasonal storage.

This is because the monthly generation profile of solar and wind are mirror images of each other, so if we have the right proportions of each we can deliver our seasonal energy needs without storage. This means that we only have to deal with daily and weather-related cycles.
Daily cycles mean that solar stops producing regularly. So when the sun goes down on a windless winter evening, we will have negligible renewable generation and will have to rely on imports. But the same thing will have happened in our neighbouring countries, so they won’t have any spare to export, killing all benefits from interconnectors during that time.
Weather patterns extend these daily cycles to cover multiple days at a time, often over large swathes of the continent simultaneously. The biggest and worst (from an energy point of view) of these cycles is known in Germany as the kalte dunkel Flaute, the cold dark doldrums. This is a high pressure system that sits over most of the continent for up to a fortnight at a time. Its maximum occurs every couple of years, but shorter durations and narrower geographies are much more frequent, with interconnectors effectively useless for the entire duration.
So the proper use of interconnectors is for supplementary capacity above the sum of total demand and supply margin, in order to keep our normal energy prices competitive.

The second challenge, our neighbours’ energy transition plans, is critical to whether or not interconnectors can help us. France’s recently published PPE plan envisages sufficient dispatchable and baseload energy for their own needs, supplemented by renewables for export. This means that their exportable energy will fluctuate approximately with ours, which doesn’t help when ours aren’t generating. And the German, Dutch, Spanish, Italian, Danish and Belgian plans all rely on imports during times of system stress, which are largely concurrent with both each other’s and ours.

The third challenge is Brexit. The only two things that prevent our neighbours saying “I don’t care how much you want to pay, our consumers are more important than yours” are the Single Market and the European Court of Justice. If we exit these, then we can’t insist on our neighbours exporting to us when we need the energy, however much we offer to pay for it.

So if all of the solutions targeted by BEIS, National Grid and Ofgem are inadequate for the job of keeping the lights on cost-effectively, what is the solution? Simple: large-scale, long duration storage. To balance the grid during evening peaks, we need what the government itself identified in its 2014 Technology Innovation Needs Analysis, or TINA report: 27.4GW of new storage with an average duration of 5 hours.

And to cover baseload demand as well, and the weather patterns we can expect, we need storage to be at least equal to:

And there are only two technologies available today that can deliver this: pumped hydro and compressed air energy storage.
There are few potential locations for pumped hydro, and every one of them is remote from both supply and demand. And the cost is prohibitive, besides the fact that each scheme floods two valleys.
Compressed Air Energy Storage, on the other hand, is less than one-third of the cost of pumped hydro. Storelectric’s versions are more efficient than batteries, and potential locations are both widespread and conveniently close to both supply and demand. There is more than enough geological capacity in the UK to store enough energy to power the whole of Britain for the fortnight’s weather patterns, probably with exports too.

The above is an argument based on the United Kingdom’s energy system. However it applies, with variants, to energy systems world-wide. Indeed, in the first and smallest phase (balancing grids to supply variable demand with low-carbon generation), Storelectric estimates that the capital investment required globally is $1trn, with annual revenues at roughly ¼ of this figure. The second (baseload) and third (supporting the decarbonisation of heating, transportation and industry) phases are much bigger.
And while CAES currently targets salt basins, these are plentiful world-wide (see the maps below of Europe, USA and the Middle East); and in future Storelectric plans to develop CAES in other geologies.

Storelectric has two types of CAES. One is the world’s most efficient version, entirely emissions-free and profitable in today’s market. The other is uniquely retro-fittable to suitably located existing power stations, giving new life to stranded assets by almost halving their emissions, cutting costs and increasing revenue streams. Both can be built using today’s technologies, and therefore have very low technical risk. And both have been supported by the analyses of engineering multinationals. All we need is the funds to build the first of each.