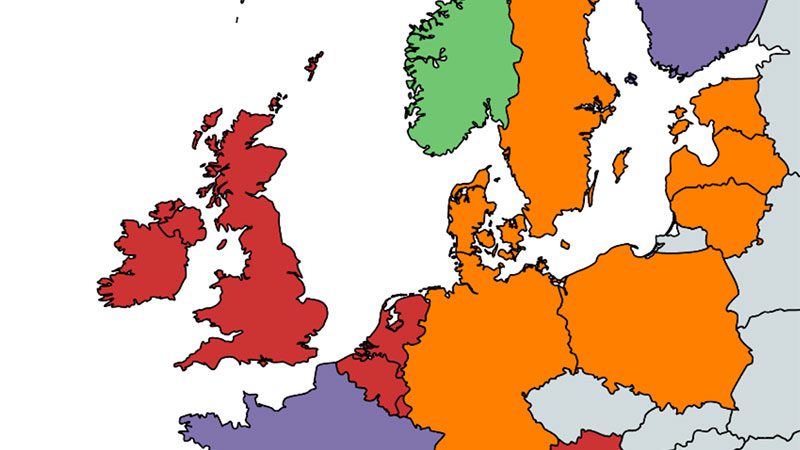 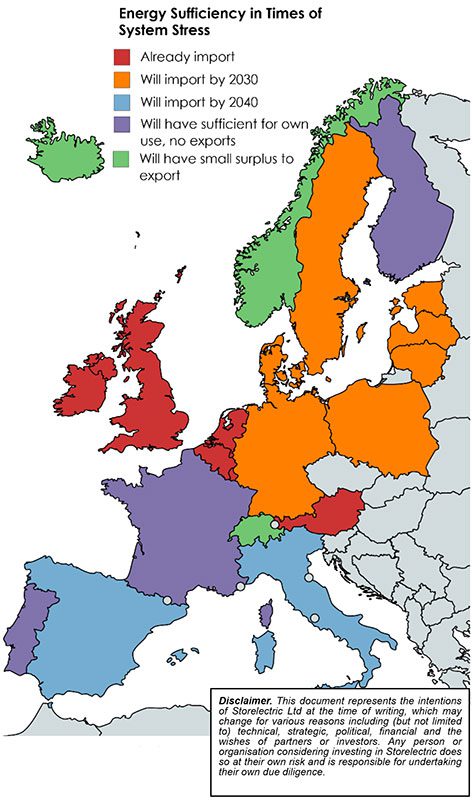 The United Kingdom no longer has enough domestically generated electricity for its own peak needs, and relies on imports through interconnectors. As the grid decarbonises, power stations are closing, increasing the country’s reliance on intermittent renewable generation. But the sun doesn’t always shine and the wind doesn’t always blow, so how do we power the grid after sunset on a windless winter evening?

Storelectric has studied the energy transition plans of 6 countries in detail (UK, DE, FR, IT, ES, NL – who account for 75% of pre-Brexit EU GDP – please forgive the number of abbreviations!) and are aware in general terms of the plans of most of our other neighbouring countries. As can be seen from the map, during “times of system stress” (i.e. high demand and/or low renewable generation) the UK, NL, BE, EI and AT already rely on electricity imports via interconnectors. By 2030 these will be joined by DE, PL, SE and the Baltic states. By 2040 Spain and Italy will join them. France and Finland will have enough for their own needs due to nuclear, and Portugal due to hydro – but no surplus to export. Only Norway, Switzerland and Iceland will have electricity to export – and a 1GW interconnector to Iceland is expected to cost £5-10bn, 7-14 times the cost of Storelectric’s CAES.

Given that these “times of system stress” are largely concurrent (e.g. after sunset on a windless winter evening), this means that there will not be enough spare electricity for all the countries that rely on the imports, resulting in “enforced DSR”, i.e. rolling black-outs and brown-outs, in all of them. Because such times of system stress are often concurrent in the UK and our neighbours, when all are importing, who is exporting? This leads to international system shortages and prices rising unbelievably high, such as occurred on 24th July 2022. While such events are currently rare, the energy transition plans of all European countries guarantees that they will become common: having predicted them since 2016 to occur by 2025-30, the Ukrainian war has accelerated this.

Note that this critical shortfall was despite the country having turned on coal-fired power stations (in July, 1.7% of energy was from coal, versus a plan of zero): had it occurred a year later, these power stations would not still have existed. And the government has relaxed its regulations to keep the three remaining power stations open over the coming winter.

In Brexiting the Single Market and the jurisdiction of the European Court of Justice, the UK is no longer legally treated as domestic custom. This in turn gives them a political imperative to cut off Great Britain (even if breaching contracts) during times of system stress, as no grid operator will politically be able to say “we caused this black-out in one of our major cities because we could earn millions by exporting what we needed”.

Many have posited that when renewables are not generating in one part of Europe, they are in another, so grid resilience can be built by a large network of interconnectors. Indeed, European Projects of Common Interest are putting billions of Euros behind this concept. However the kalte Dunkelflaute (cold dark doldrums) identified by the French and German grids as occurring roughly every couple of years disproves this: it is a weather pattern that allows minimal or no renewable generation over the entire continent for a fortnight. If narrower geographies of a few countries, and shorter timescales of a few days, are considered, then these weather patterns are frequent.

Even if one corner of Europe were generating when another is not, then this would require a network of many hundreds of gigawatts of interconnectors in corridors at every point and half-point of the compass (i.e. 8 such corridors) in order to bring, for example, British and Irish generated wind to Greece and the Balkans, or Iberian solar to Scandinavia. There would heed to be further corridors of similar size framing the continent in case the split is north-south or east-west. This is not only prohibitively expensive but also environmentally very harmful.

Moreover, interconnectors are DC connected and so carry no natural inertia. Grid reliability depends on real inertia which can prevent failures. The synthetic inertia that can be provided by DC connected systems (including wind and solar generation and batteries also) is only good for assisting the speedy recovery from failure, not preventing the failure in the first place.

Not only that, but every corner of Europe would have to have a massive over-build of renewable generation in order to feed those interconnectors. So, if there is wind and sunshine in Greece and southern Italy while Germany and Poland lack such generation and other countries have sufficient only for their own needs, then Greece and southern Italy would need sufficient wind and solar generation capacity to power Germany and Poland. This applies to every part of Europe, and would require a scale of over-investment in renewable generation that would be financially prohibitive, environmentally catastrophic and politically unacceptable.

National Grid publishes an annual Winter Outlook Report (and a summer one) in which they confidently calculate supply margins to be more than adequate. However their figures don’t stand up to scrutiny. While the 2020 report predicts a 4.8GW (8%) supply margin, it relies on 6GW de-rated (i.e. average) renewable generation which is often zero, 10GW “other” (un-defined and mysterious, probably short-duration and therefore quickly exhausted) generation and 2.8GW in-flows through interconnectors. Remove these and the supply margin drops to minus 4-14GW (-7% to -24%) depending on whether “other” generation is included.

So the only way for each of these importing countries to keep the lights on, in every country and grid, is large amounts of large-scale long-duration storage. Storelectric’s CAES is a similar cost per gigawatt (GW) to the BritNed interconnector and can be relied upon in ways in which (as we see above) interconnectors cannot. And the proper role of interconnectors is not to provide resilience and back-up but instead to facilitate the operation of grids and to ensure that energy costs remain affordable throughout the continent.